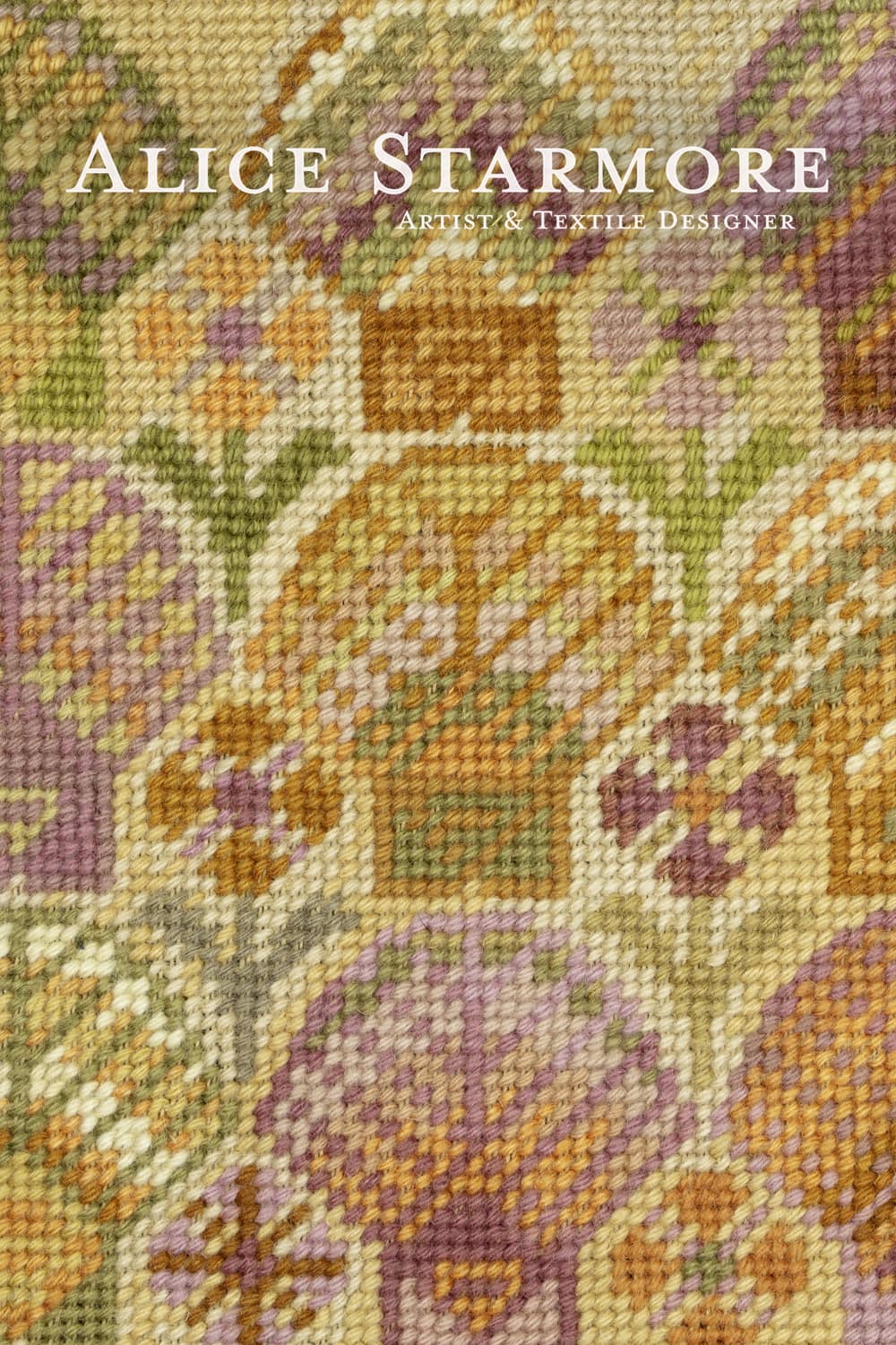 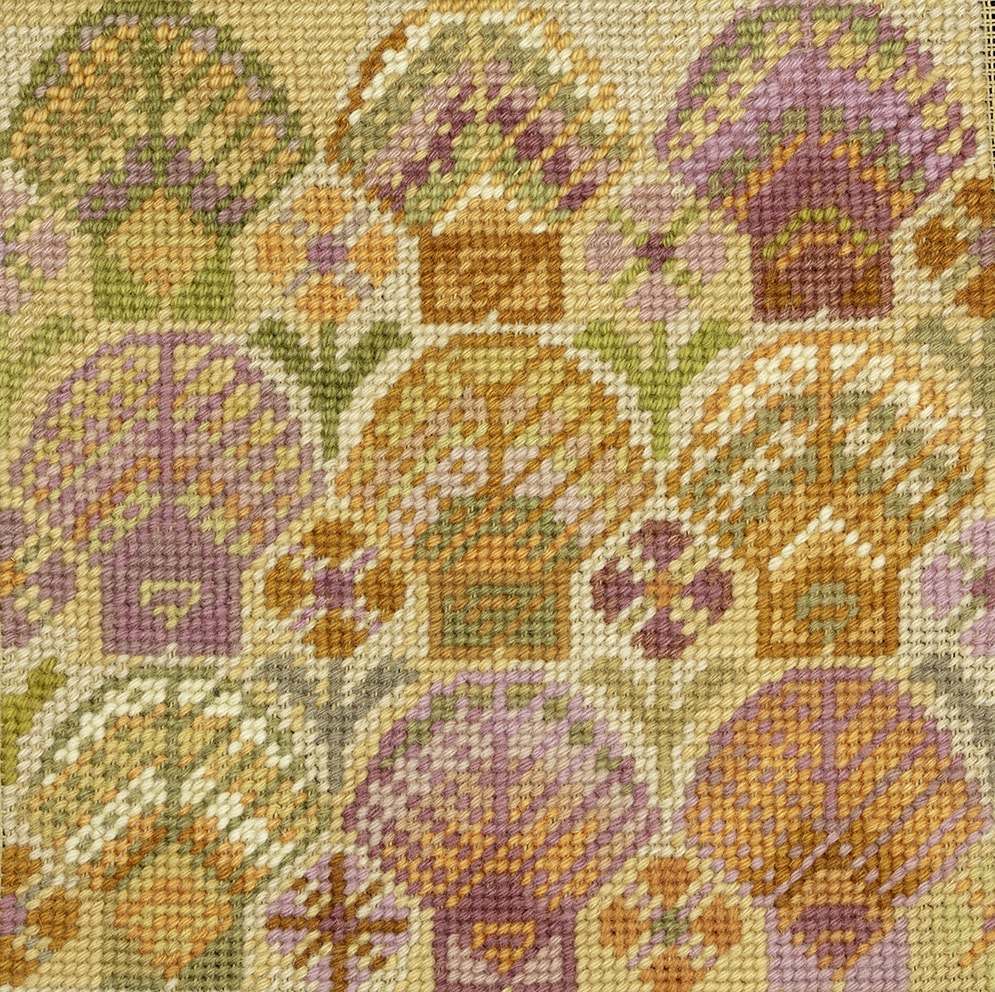 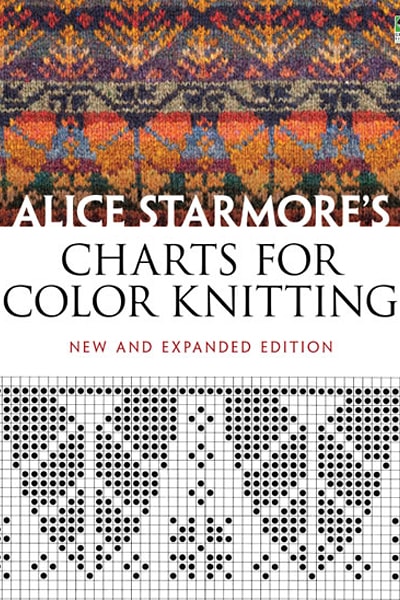 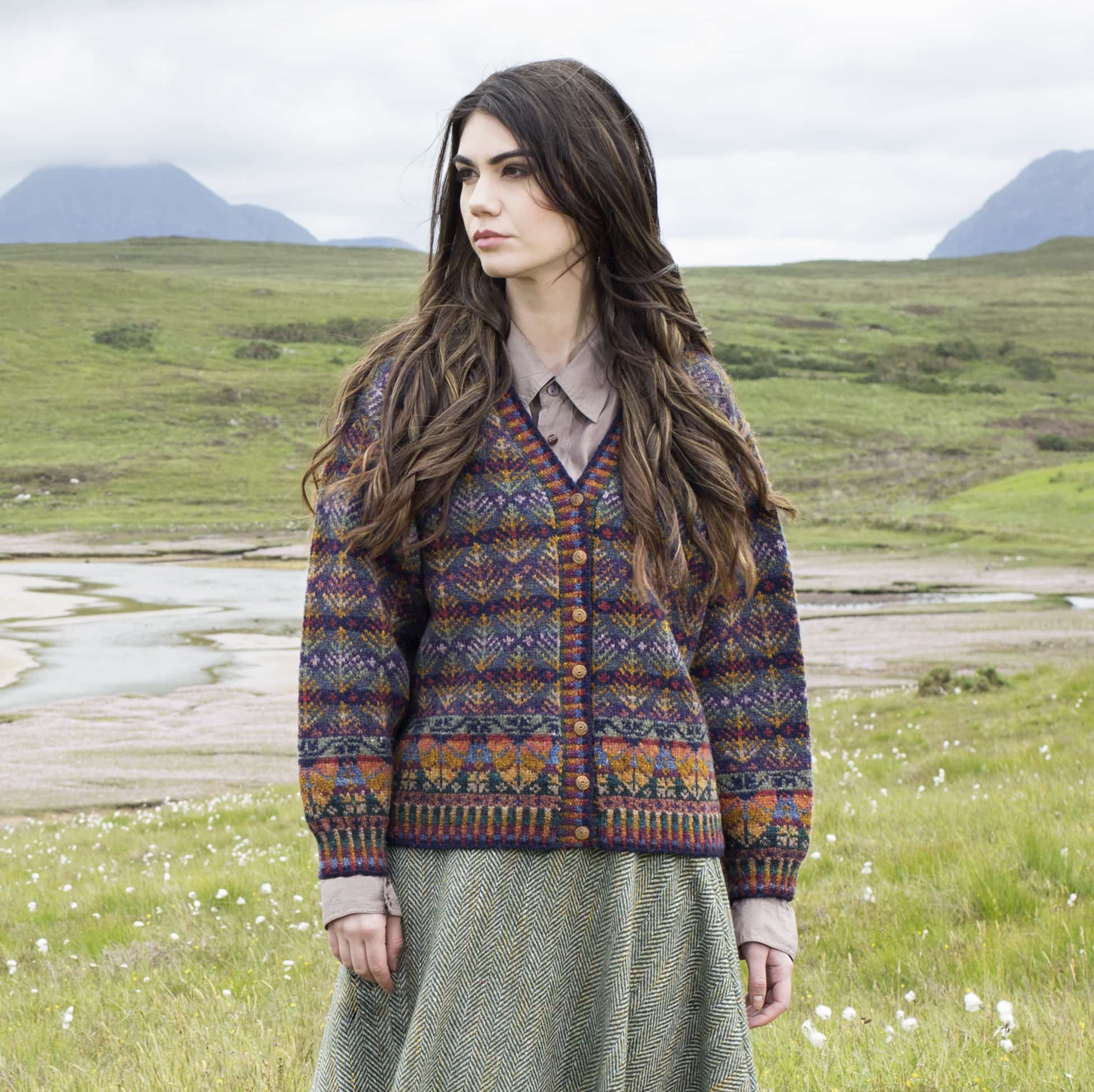 I co-founded Windfall Press in 1991 in partnership with my husband Graham. He was a maths teacher at the time, disenchanted by a rising tide of bureaucracy and ready to escape the classroom. His degree is in Maths & Philosophy, with a special interest in logic and computing, and he knew of the huge advances made in desktop publishing during the late 80s. So we decided to buy the miraculous new Apple Mac IIci that had recently revolutionised the world of DTP. We were soon pushing it to the limit. Large knitting charts are byte-hungry beasts and although our kit was state of the art for the time, we were still practically falling asleep over the laser printer waiting for charts to print out. I wanted knitters to enjoy maximum clarity when using my charts, and to this end we conducted dozens of experiments to determine the optimum fonts and line weights – a process that is still going on today since my charting system is constantly expanding and developing.

Back then, in what seems like the remote steam age, printing a book involved generating camera-ready copy (CRC) in the form of high resolution bromides from a fancy and extremely expensive device called an imagesetter. There was no way we could afford one of those, so we had to outsource; our files were put on myriad little floppy discs, sent to a graphics bureau and returned in the form of beautifully-clear bromides.

By the beginning of September 1991 we were ready to start Windfall’s very first title, Charts For Colour Knitting. I am used to working hard and working quickly, but looking back I am not sure when I slept during those next four months. In parallel with writing and compiling Charts, I was also writing the text and designing the garments for The Celtic Collection, which would turn out to be the best-selling blockbuster that founded the genre now known as Celtic knitting. By the beginning of December Charts was done and dusted and the final dot put into place; the box of floppy discs it occupied was mighty, and off it went to a bureau in the Lake District to be imageset as bromide CRC.

Over the previous weeks we had obtained quotations from various printing firms, and the best offer came from a long-established company called Butler & Tanner, in Frome, Somerset. A contract was signed, the CRC dispatched, and production was ready to begin. At this point, I will say two things to the six thousand people who have a copy of that first edition of Charts For Colour Knitting – first, a resounding thank-you for giving Windfall your support at a very crucial stage. Secondly, you own something unique and very special, produced by a couple of idealists with stars in their eyes who had not yet learned the hard economics of publishing. We wanted the book to be wonderful, and to that end we chose to have it printed on lovely 170 gram paper, which is much heavier than usual. The design of a book is an artistic process, at the end of which you have a highly inartistic problem – tons of books that have to be shipped around the world. And if you have chosen inordinately heavy paper then your problem is going to be weightier still, and your shipping costs higher. But hey! We live and learn; in that case, the hard way. 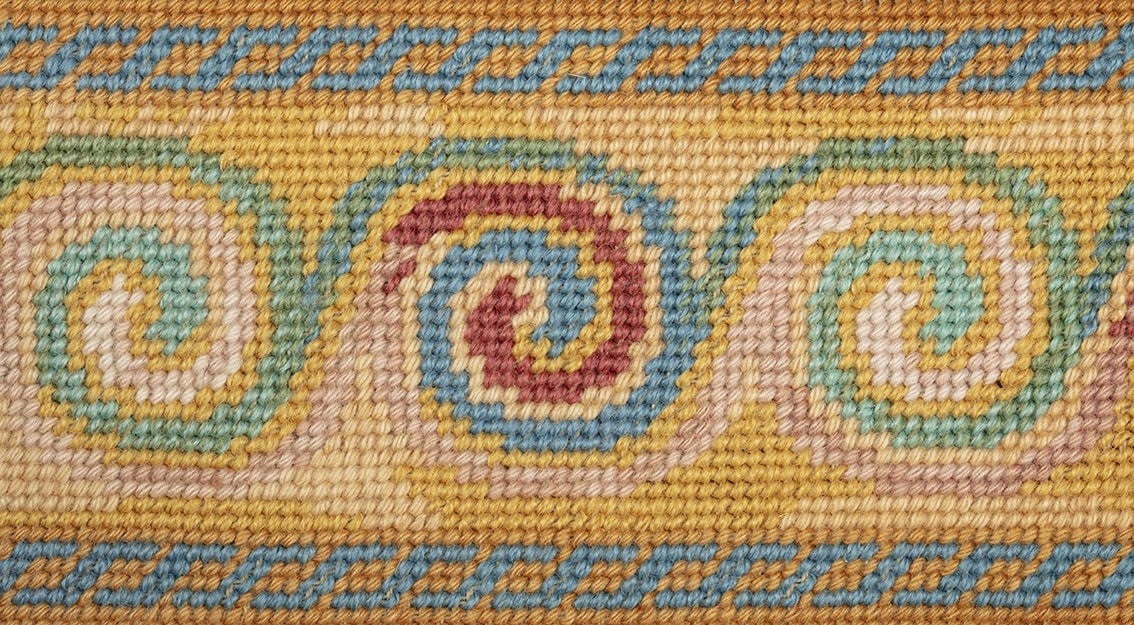 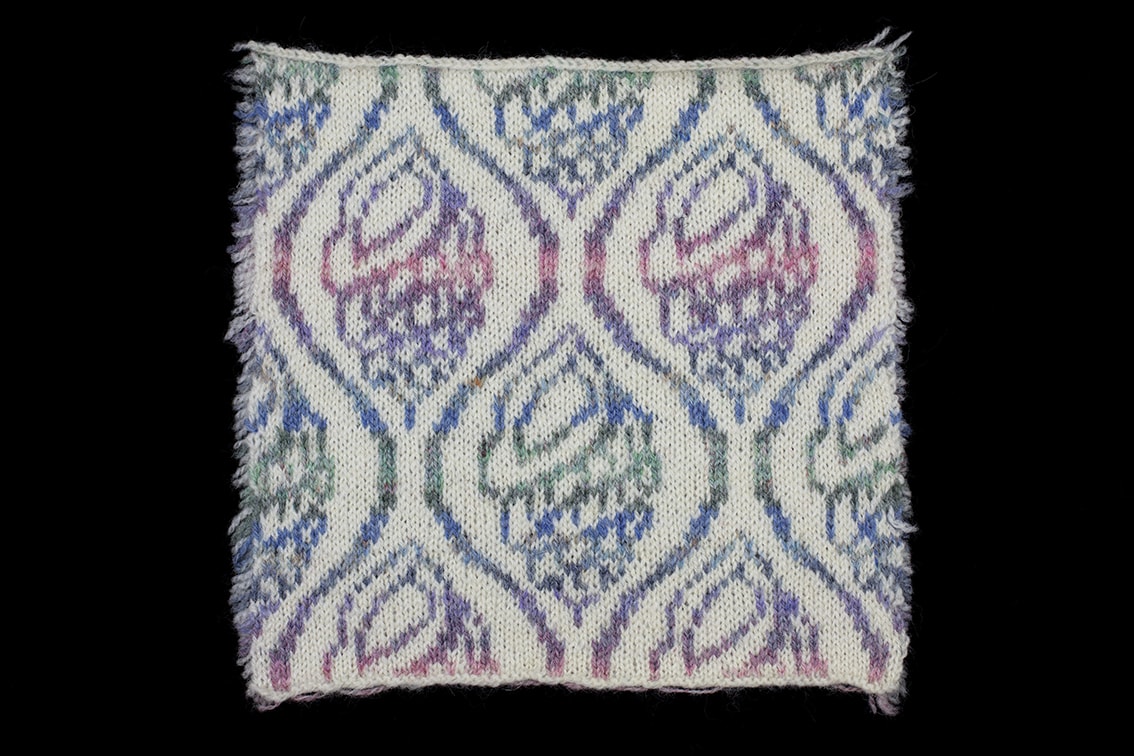 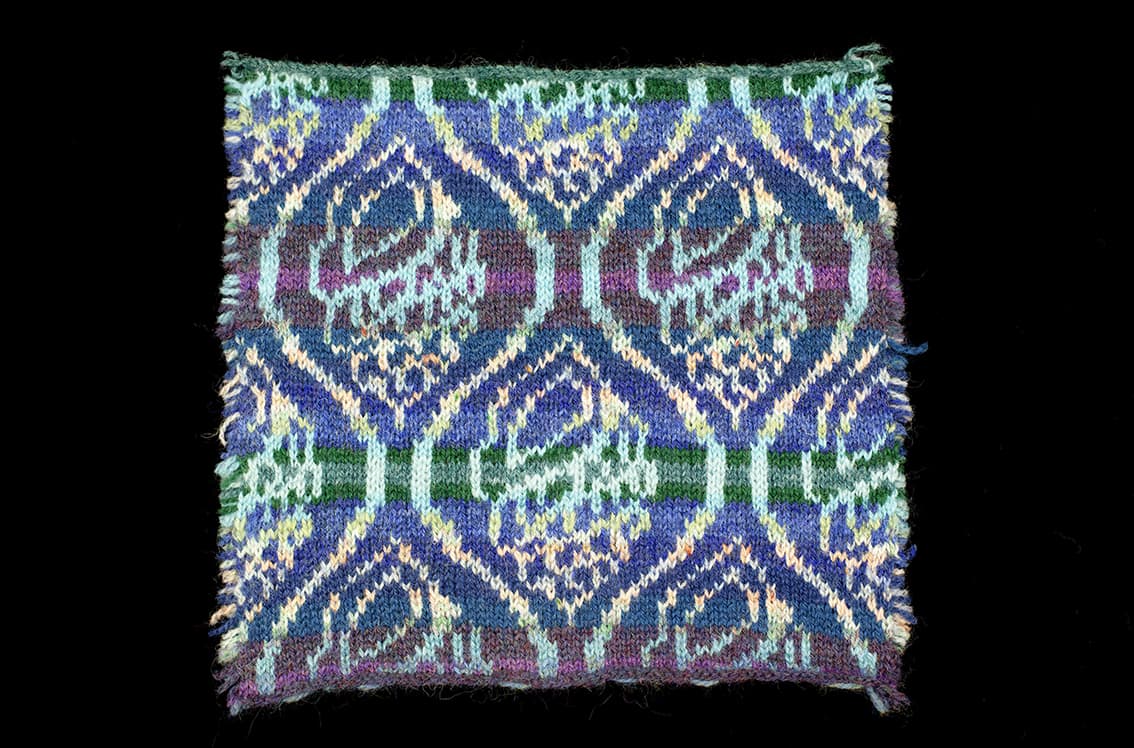 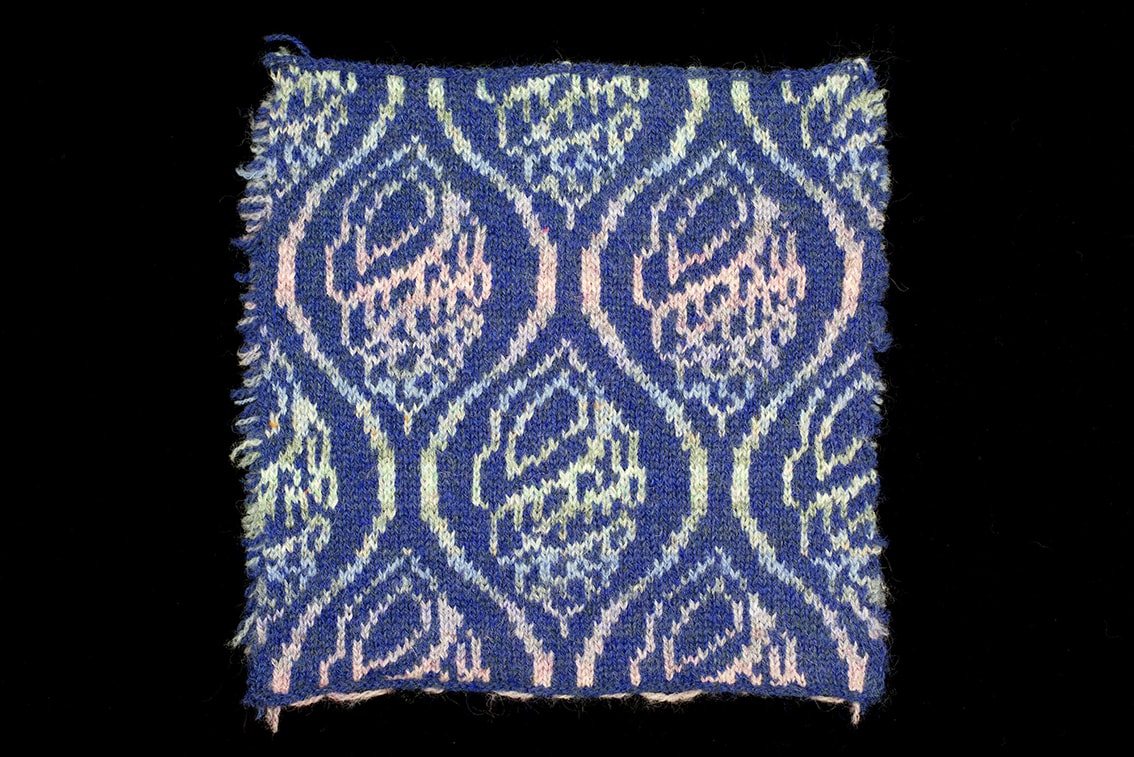 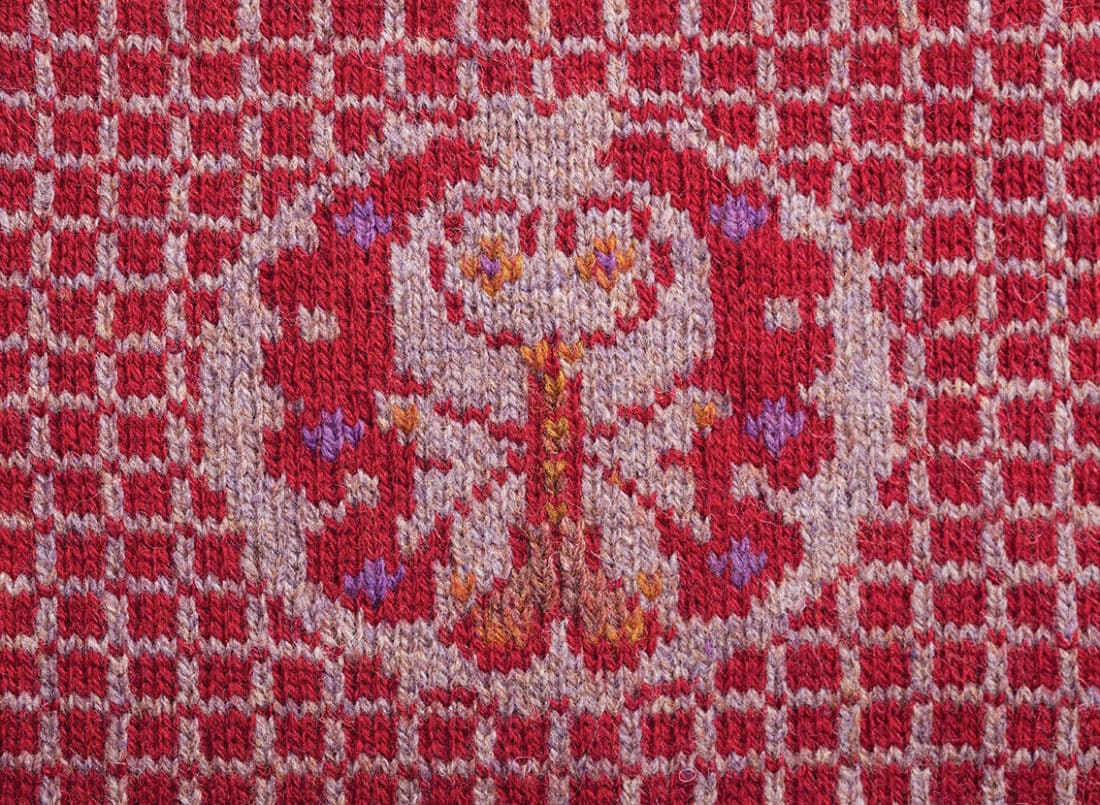 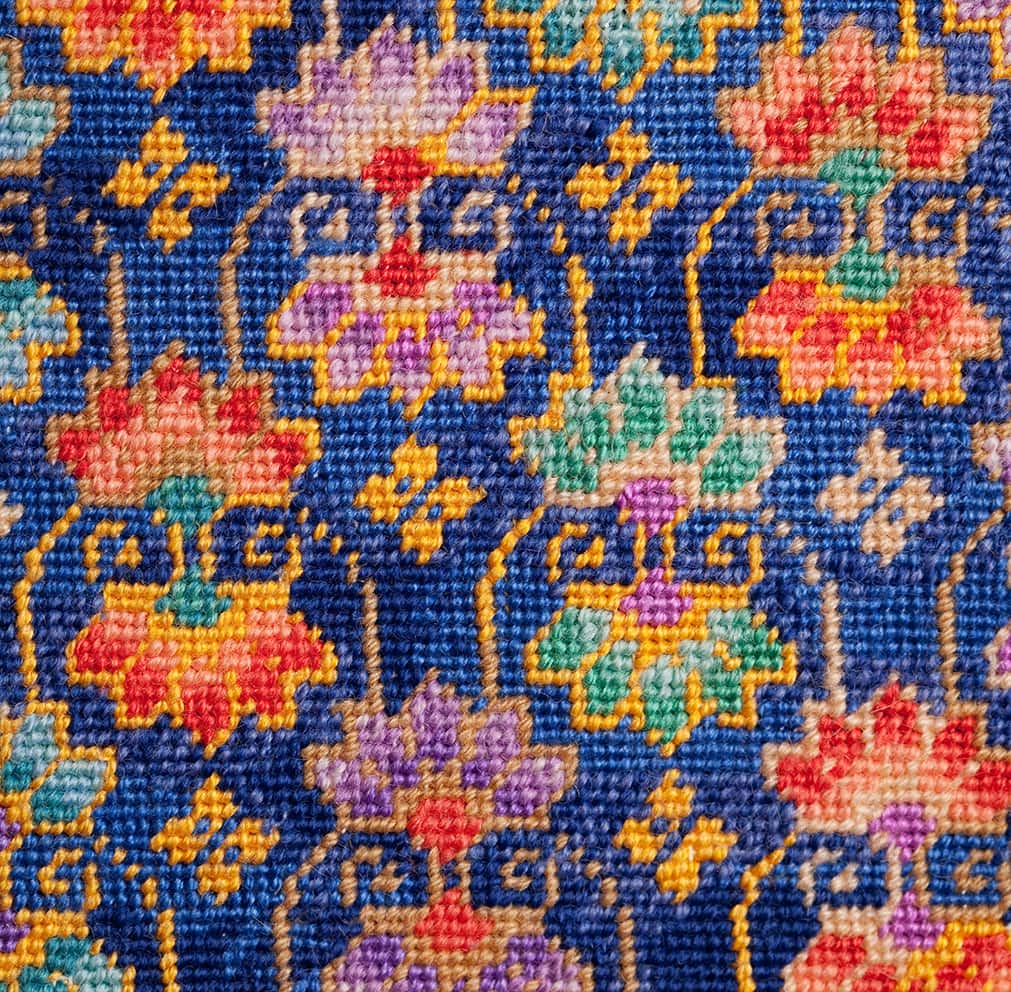 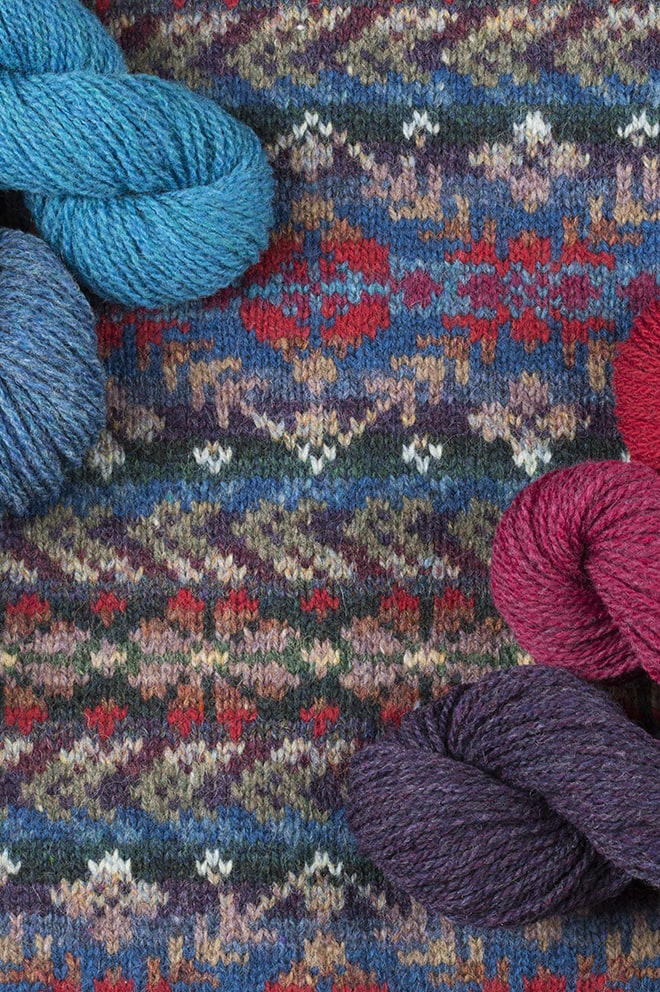 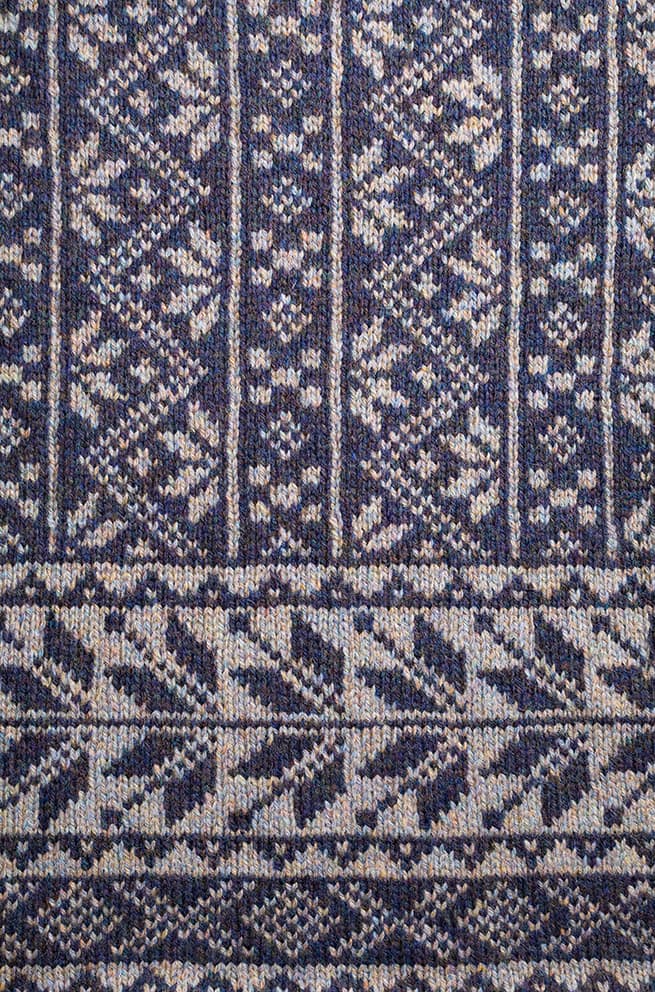 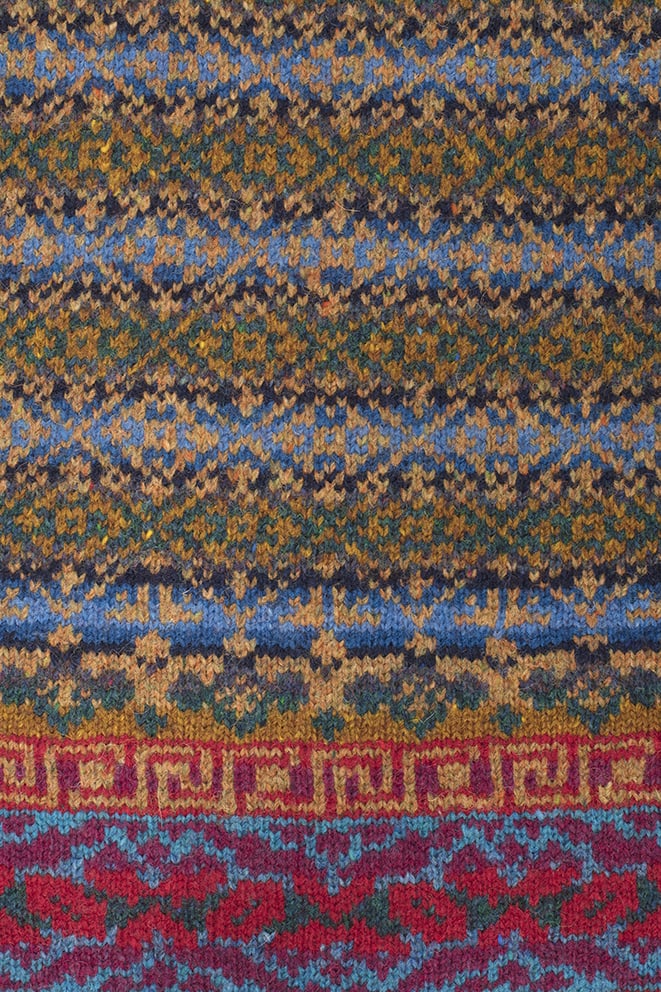 Charts For Colour Knitting came off the press just before Christmas 1991. I took a few days off from Celtic knitting and flew with Graham from Stornoway to Glasgow, where we hired a Ford Transit van and drove the 400 miles down to Somerset feeling slightly nervous but highly excited. “An almighty buzz!” is the only way to describe seeing our 6,000 books coming off the conveyor belt at the Butler & Tanner factory. The place was huge and the binding line was fascinating. The page sheets had been printed a few days previous in a different area of the factory, and they were now being bound into a hardback book with finished copies coming off the end of the line, ready for packing. The binding process took four hours and our production slot was immediately behind that of a full colour history of the Scottish band, Run-Rig.

We had hired a trucker and freight agent to take 5,000 copies to Folkestone for onward shipment to the USA, while the other 1,000 copies were heading north with us in the Transit. We will never forget the rear end of the van sinking and groaning when a factory forklift loaded the pallet of books; it was over the Transit’s load limit but the fork lift driver was jauntily dismissive. “We put much more on them than that,” was his comment, leaving us to pilot the lumbering van back to Scotland.

The snow started at Preston and continued past the infamous Shap summit, over which the van groaned at 30mph. The screen wash ran out and we had a scary trundle, peering through a glass darkly until we came to a place near Carlisle where we could refill it, but the snow stopped and the euphoria of crossing the Scottish border erased the sweat and anxiety. Beattock summit on the A74 was our last hurdle, and again the van groaned at low speed. Then after an hour’s steady coast down to Glasgow, we reached the Hebrides Haulage depot where the pallet was off-loaded for onward sea freight to the Isle of Lewis. Next day, just before our flight home, I popped into the airport bookshop and was amazed to see the Run Rig book that I had seen in the factory only two days previous. That was fast footwork; our weighty tome would have to wait until the New Year before bursting onto the market. And thus ended the saga of Windfall’s very first magnum opus – the first of a string of books to flow off our Mac IIci, some of which would achieve legendary status among knitters.

That first edition of Charts sold out and the weight factor meant it would never be printed again in that form. The current softback edition is much lighter, although it has an additional colour swatch chapter that was not in the original. 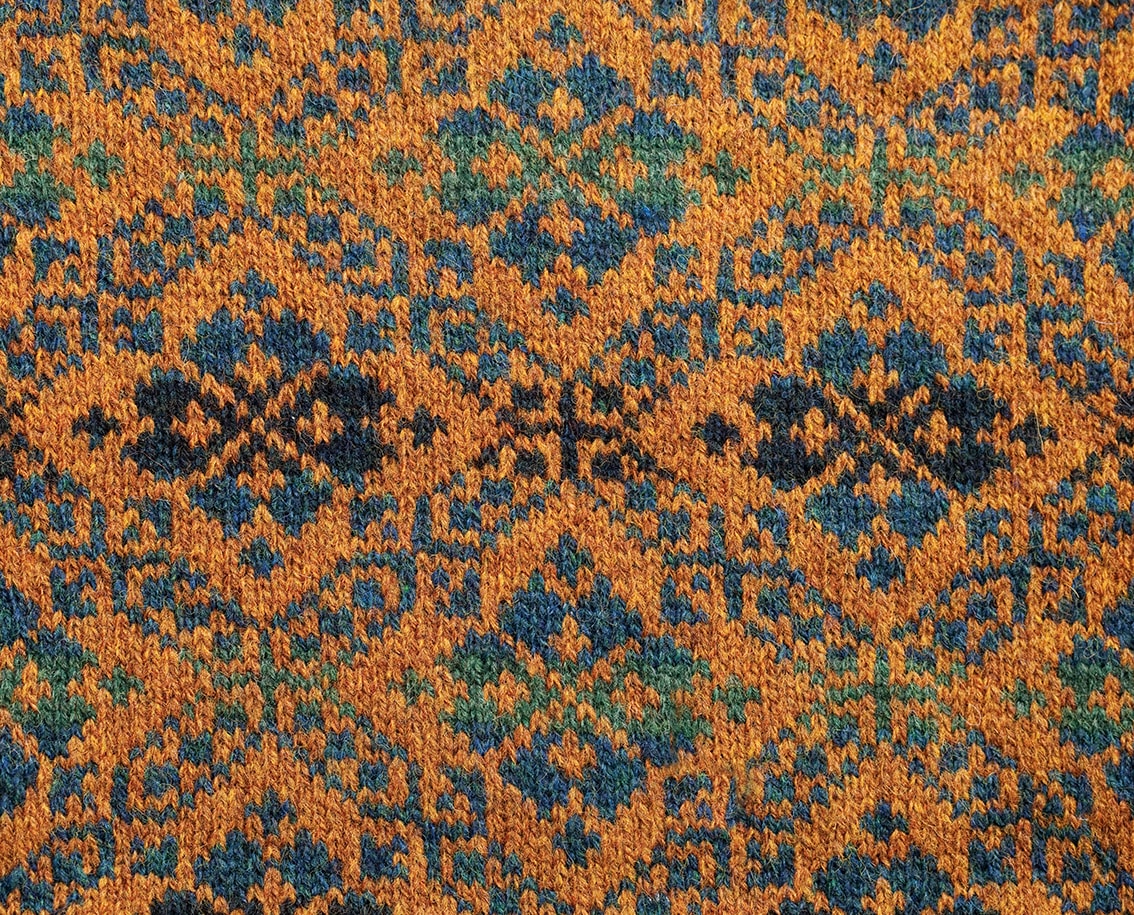